The Grand Canal is 89 acres and nine (9) miles long. A mile longer than Phillippi Creek. The Siesta Key Grand Canal Regeneration (SK GCR) Project aims to regenerate the Grand Canal, improve water quality, and re-establish the canal as a juvenile fish nursery and a sea life habitat, one section at a time, through the installation of Mini Reefs. 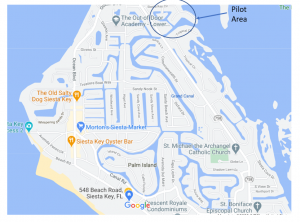 This project will regenerate the depleted fishery with thousands of juvenile crabs and fish every year.  Creating a wildlife aquaculture habitat instead of a monoculture fish farm. This balanced ecological environment will be more than just mini reefs as we move forward.

Mini Reef, pictured below, is estimated to last for 500 years and acts as Nature’s kidney’s filtering 30,000 gallons of water per day. Once fully established, the Mini Reef will support 300 fish and 200 crabs per year. 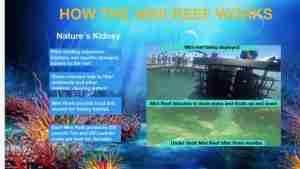 The installation result includes improved water quality by providing dissolved oxygen (this will expand as the mini reef mature), reduced turbidity and clarity to improve grass habitat growth, and added filtering for nutrients creating a nursery environment for sea life.

The Mini Reef brochure describes the mini reef features, its initial appearance before it goes into the water, and what it looks like after nine (9) weeks in the water. Mini Reef is 3’x2’x2’, and there is a smaller, one less shelf, for areas where water is less than 24″ deep.  Mini Reef’s float and are tied to four dock poles with standard mooring lines, with rollers for a smooth ride with the tide up and down. The standard mini reef needs 24″ of water depth. Still, it should be a little deeper so it can float up and down, allowing fish to swim below. It cost $300 for a mini reef.

This project started as a Pilot. The Pilot project was launched on Nov 5th, and the map below shows the area we wanted to tackle, i.e., at the Grand Canal water entrance and exit. The Canal only has one way in and out. We successfully installed 23 mini reefs in time for Christmas. Click here are a few pictures of our install crew David and David Jr from Ocean Habitats, the SKA team, and the happy dock owners.

The pilot phase was successfully completed. We are planning to start the next phase will begin in January. This will be discussed at the SKA member’s meeting on January 7th. The Pilot project area.  While we actually install 17 in this area, we also installed another six in other Canal locations. Also, we discovered the Grand Canal has at least 24 mini reefs currently in place. Research on this will continue as we move through the canal system. With our SK GCR pilot install, we almost doubled what was currently in place. And there is much more to come as we plan to install Mini Reefs under all homeowner’s dock. 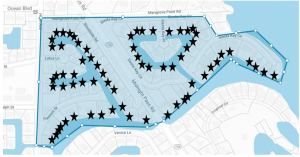 The Pilot project potential dock owners are as shown as stars on the map.  Click here to see a larger map of the Pilot area. The next phase will be started in January, and plans are to move south and east through the Canal and to have 30 more mini reefs installed in February as our target.

Questions on the project can be directed to Phil Chiocchio and Jean Cannon via email at siestakeyassoc1947@gmail.com

Here are links to recent articles and project newsletters

Siesta residents start a project to clean the canal on Dec 16, 2020

Purchase or Donate Mini Reef for the Grand Canal Regeneration

The SKA SK GCR Project will use the funds submitted for Mini Reef purchases, installs and general project services.  When you purchase or donate, you agree to fund the SK Grand Canal Regeneration project, including Mini Reef purchases. You will receive a SKA receipt and an email acknowledgment from the SKA and SK GCR project team.

If you want to purchase, enter the number of reefs and the amount (cost for a Mini Reef including install is $300), e.g., $600 for two Mini Reefs. If donating, enter the donation amount. Complete the required fields identified by an asterisk, select a payment, complete as needed, and press Submit.

Thank you for helping to Regenerate the Siesta Key Grand Canal.

When you submit this form to Purchase a Mini Reef, since it includes install, check the ‘Access Permission’ box. By doing this, you agree to allow the Mini Reef installer to access your (or someone’s) property for the install.

We welcome all donations to the project in any amount.  A $300 donation entitles you to ‘naming rights’ for the entire Mini Reef. A donation of $100 allows you to submit one name. During the project, the SKA team will select the location for donated Reefs, put a name on the reef, and film the install. To put a name on the donation, enter it in the ‘In the Name of ‘ field.

Press the Donate button for purchase or to donate.