Homesteaders began settling on “Sarasota Key” (now Siesta Key) in the 1880’s, but few remained long enough to establish their claims. An exception was Capt. Louis Roberts and his wife, Ocean Hansen Roberts, for whom Ocean Boulevard, Roberts Road and Hansen Bayou are named. Photo by Granville Wilde (1985) In 1906, Capt. Roberts enlarged his house and began calling it the Roberts Hotel. The following year he, along with Harry Higel and E.M. Arbogast, formed the Siesta Land Company. By 1946, the Key was still labeled “Sarasota Key” on government maps, but was called Siesta Key by the County. 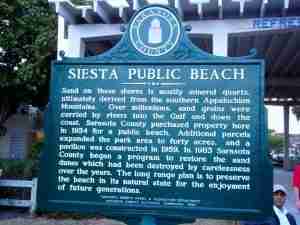 In late 1910, E.M. Arbogast began construction of the Bay Island Hotel on the north shore of the Key. Meanwhile, Harry Higel’s dredge was busy not only digging the canals and filling low land, but also excavating shell deposits that could be used to surface the roads as they were built.

The canal that leads from Hansen Bayou westward to the recently closed Siesta Fish Market was dug for its shell deposits.

Harry Higel was mayor of Sarasota in 1916 and supported a bond issue that was passed and resulted in the building of the first Siesta Key Bridge in 1917. The second bridge on Stickney Point Road was built by the County in 1926. They platted the subdivision of Siesta on the northern end of the Key.

The Siesta Key Association was founded on November 12, 1948, as a community group which was dedicated to maintaining Siesta Key as an attractive residential area. It is a non-profit organization. It has been a strong advocate for Key residents since then.

The  Board of Directors  gather facts and figures, consult with government officials, represent the Association at numerous meeting and frequently testifying at hearings before the County Commission and other governmental offices. All are volunteers who serve without compensation.

Throughout the Key, many local neighborhood and condominium associations work for the maintenance or improvement of conditions in their immediate neighborhoods. The Siesta Key Association cooperates with these groups in matters of mutual interest.

Over the years, we have shaped the vision of a prestigious residential beach community within the Sarasota County area. We accomplished this by working with County officials to develop zoning policies that protect our quality of life. In fact, it was the founders of SKA that convinced Sarasota County to develop the first Zoning Code in 1954. The Zoning Code was eventually adopted County-wide in 1960. Since 1960, we have worked diligently to improve the code to prevent over development, including our involvement in creating the Siesta Key Overlay District in 1999 that separates our zoning from that of the mainland.

Besides zoning, SKA has had a positive impact on many other issues such as “Save Our Sand”, which saved our barrier sand bar along Big Pass from being removed to feed the Venice beaches in 1992. In 2009 we are actively involved in the Siesta Public Beach renovations and are encouraging the County to create a sustainable, eco-friendly beach environment. We worked with the County  on Siesta Beach Storm water planning to eliminate flooding and ensure rainwater drainage was  handled in an efficient, ecologically safe manner.